In my records I found a picture of Collins T McArdle.  (With an unidentified woman that should be his wife).  In my family records I show three Collins McArdles – one is far enough back that it is obviously not the correct record.  The other two are father and son. (The father is my 2nd great grand uncle) The son is listed as Collins Tint leading me to think that is him….  but it could be either….

Collins and Nancy (Stevens) McArdle They were married in IL and in 1860 established their home on a farm of 200 acres in Tonganoxie Twp, Leavenworth Co, KS.  They were pioneer farmers and honored citizens of the county.”

Collins’ funeral was held at the Friends Church.  In the obit of Aug 1909, he married Nancy Stevens and “Then came to this part of the country and located in this county, where he resided until the opening of OK.  He took a claim but later came back here.  About 8 yrs ago, he was stricken with paralysis and suffered from it ever since.  Besides a wife and brother, 11 children survive, all of whom were present at the funeral except .  The sons are : Remus, James, and Collins T. Of Covington, OK. Virgil of Beaver Co. OK and John T of Tonganoxie.  The daughters are Mrs. Birdie Pardee of South Dakota: Mrs Jennie Keltner of Beaver Co, OK, Mrs W.W. McWilliams, Mrs Henry Geib, Mrs Julia Moore and Mrs Bessie Vantine of this place.”

Came to Okla. staked claim 6 miles South of Covington, but before he received the patent in Aug 12, 1905 he sold it and moved back to KS.

In the Tongonoxie Mirror Collins was badly beaten by two prisoners who escaped from jail at which he was a jailer. When he left the rom, they stole his revolver, beating him with it.  He was unconscious for 2 days and returned to work with badly bruised and beaten face and body (1923)

Collins McArdle applied for veteran’s pension based on multiple discabilies associated with his military duties in Cuba and World War I. As part of his pension application is a handwritten note to Winfield Scott, then head of the Pension Bureau, Dept of Interior. His letter begins, “Dear Friend”.  On the envelope, Gen (Ret) Scott writes: “Folger – Make this case special as soon as med exam arrives.  Tell him so.  I know him. (Signed) Scott, Com” Dtd Oct 1923)

Collins T was married to Molleine Mallory Covington and lived in Kansas also.  Me is listed as passing away in Fayetteville, Arkansas.  (in 1940) and his wife passed away in 1979.

His daughter Mary Katheryn McArdle is listed as moving to live with her daughter and grandchildren in Louisville, KY.  It might be worthwhile to look up their information and visit sometime.  – they might be able to verify the photo is of Collins Tint McArdle.  The records I have show the daughter of Mary Katheryn as Delphina Kay Johnson.  – who married a Danavell Orville Miller.

I’ll have to look more into it later…. 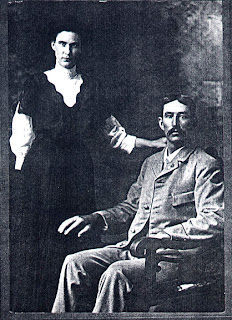 I’m including more pictures of Collins McArdle (father or son) 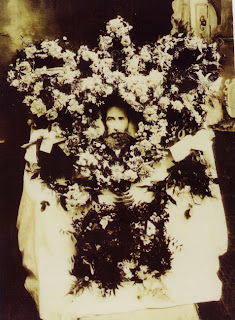 This was a photo of Collins McArdle’s Casket 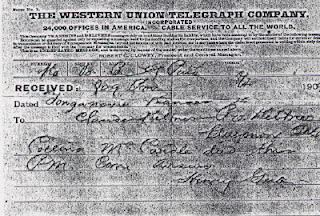 Cable telling  of the death of Collins McArdle 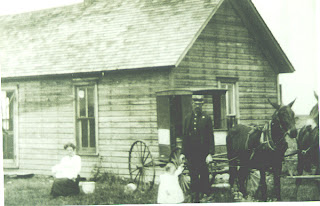 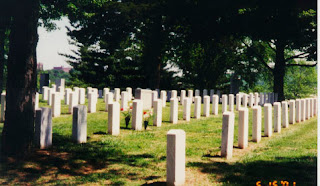 Cemetery where Collins McArdle is buried 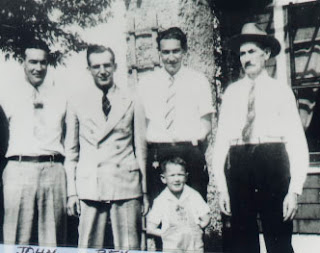 Collins T McArdle and Sons (This is obviously Collins Tint McArdle)  – The first son to the left is named John from the bottom of the scan. 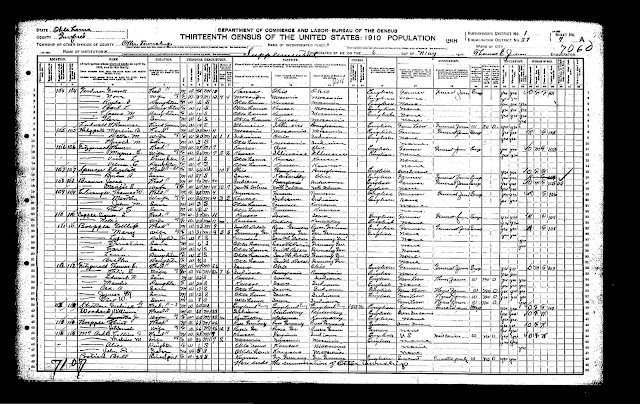 And finally a copy of the census record for Collins McArdle – This shows Collins T McArdle with Moleine and two others in the 1910 census.

This still comes down to:  Do I go on and dig up more information about another line of my family or concentrate on my direct branch.  As fun as it is to go on these branches where do you draw the line?  I have most of this information from Karin who is in this direct line.  Time for me to email and see what her thoughts are and keep in touch.  Maybe it’s time for a visit.