Playing in the Creek 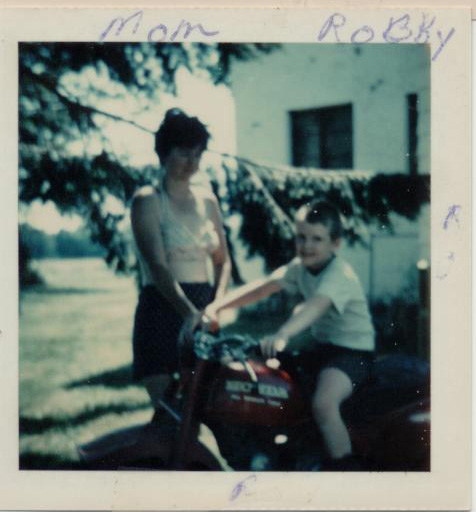 The creek by our house isn’t a spot we went down to often, but across the road under my mother’s house is the deep spot that we would head to play when we got a chance. I remember seeing tadpoles and more in the spot there, and the day that we found someone’s textbooks from the high school that had been dumped in the woods by the stream. Walking across the logs and the rocks in the stream was a great way to stay cool and something to do.

Any more I hear a lot of complaints about nothing to do around here, but all the things we did as kids are still here. The streams to play in, the river to canoe and fish, 4 wheelers to ride, sleds to play on, river to splash in, biking, and so much more! The electronics the kids currently play with can be played with anywhere – so it’s hard to imagine that’s a drawback. There aren’t as many clubs and fancy restaurants to go out to, but as families with young kids (or even families in general) we are totally fine with what is available in the area.

In our area when we really want to visit a large museum or go out to an event, we have our choice of Chicago, Indianapolis or St. Louis within a few hours drive. Champaign Urbana also gets several big names at the assembly hall and the University of Illinois has everything from sports to academics that are available. It’s not the night life of New York City, but personally I don’t need that. I love the family get togethers where everyone sits and talks about the past, shares great food, and the kids run around throughout the group playing. Walking through the woods, playing in the rivers and streams, and watching the wildlife – though I can live without the snakes, spiders, and ticks.

As kids playing in the white water in the river, playing on a sand bank, canoeing down the river, even playing in the old ruins of Conkeytown foundations and treehouses were things that could keep us occupied all day. Other days were spent walking beans and working in the fields trying to help our parents, playing in grain bins, and even riding our bikes up and down the road. Our family had both ponds (great for skating and swimming) and a pool that we used to keep cool during the time we weren’t working. After harvest, my dad would convert the fields into tracks for us to race around as well as making a golf course out of our yard.

It seemed family was always dropping in! I remember playing crochet in the yard being one of my dad’s favorites. He would pull grass up in a line all the way to the wicket to make it easier to hit in. We also were taught how to play Euchre which was a popular evening card game. It seems New Year’s Eve was always Monopoly night though. – I also loved to read, and always had a book (Nancy Drew being my favorite!). It seems we never ran out of things to do. All the things that we did are still around, so it’s hard to imagine how there isn’t anything to do now? I’m starting to think it’s just something to say.