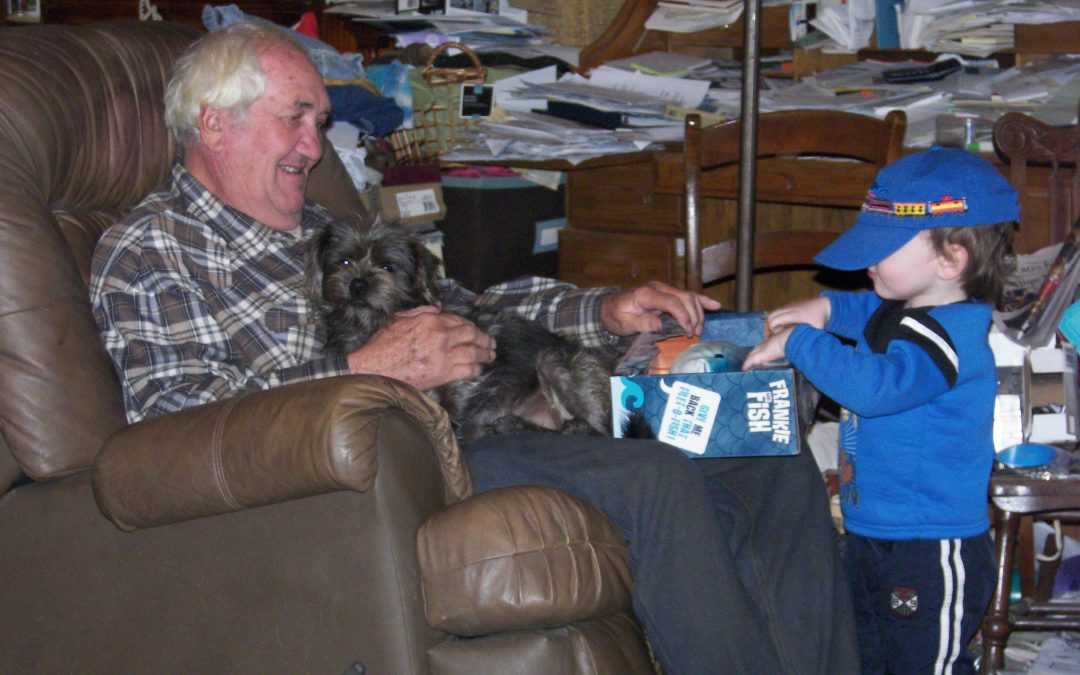 I recently read an article by someone about what she would tell her children if she was diagnosed with Alzheimer’s disease. We’ve actually lived through a few instances of both Alzheimer’s and dementia now and in the past.   Both are pretty sucky diseases! I got the impression from the article (and I could be wrong) that the person writing it was talking about the disease that you see on television.  The forgetful parent that is living in the past and is still mobile.  For Alzheimer’s disease that was a stage we did see too.  I won’t write much about it other than to say my impression was that the article was written to make caregivers feel guilty for thoughts they may be having. Thoughts that they already are probably having a hard time with.  In reality, no two people with Alzheimer’s or Dementia are the same.  When I say it’s a sucky disease I mean it becomes a disease like being locked inside your body with no way to communicate and no one has any idea if you are aware or not.  Think awake coma…. In this case though there isn’t the television hope of they are going to wake up… the hope really is that they don’t suffer too much.

My Aunt Kate was my first experience with Alzheimer’s disease.  We didn’t even have a clue what was going on at first.  Growing up I loved spending time with her.  She, my Aunt Lena Mack, and my grandmother had been the youngest girls in the family of nine kids in an immigrant family raised by my great grandmother.  The lost their father in 1918 in the flu.  My Aunt Kate had married a miner when she was young and then lost him early.  She later met my Uncle Ralph who sold insurance and took photos – lots of phots, and developed them himself!

They lived in the coolest house.  If I had been old enough when she sold that house in Danville Illinois, I would have bought it for sure!  It is still there, but has been changed beyond belief.  It’s beside DCFS and is now a hair place painted blue. It had a huge wrap around porch and at least 4 rooms upstairs.  One of the rooms was a suite and my aunt and uncle never used that part of the house – except when we visited.  One room had a huge walk in closet with a vanity also.  I would go up and check out the vanity with the mirror and old style hair brush, ten wander around.  My parents would drop us at my aunt and uncles when they wanted to go out and needed a babysitter…. My aunt always had a quilt set up in the dining room also.  I loved her quilt frame and went on to have my husband create a similar one for me.  My grandmother would piece quilts and my aunt would quilt them.  She could finish the whole quilt in a month and her stitches were amazing.

Later she moved to a condo after selling.  My grandmother sold her own house and moved nearby, and over time they moved in together.  I remember though the first signs being in the apartment where my aunt started repeating the same stories over and over again.  She had stories that we had heard a few times before, but it seemed those stories started coming up more often.  Why she didn’t have any children was a popular one.  At first though it was little things, nothing that we could really say for sure.  Over time though it started to become obvious that memory as becoming a problem.

At this point I had left for college and was just seeing everyone on visits.  On visits it still appeared my aunt was the same person but told the same stories a few too many times.  My family had started to realize though.  My grandmother and Aunt got a house together, alarms had to be put on the doors in case she wandered…. and my grandmother had to be the caregiver.  But then my grandmother got sick…  My grandmother found out she had breast cancer when my oldest was born.  We had to debate live vaccines or dead vaccines at the time because of chemo… and rearrange baptisms so that she would be healthy enough to attend.  The question though was, if the caregiver now needs care?  So my aunt had to go to a facility.

My Aunt Kate at assisted living would call home asking to be picked up.  She would try to escape, following people out. She also though would tell people stories about how she worked there and would run around making people’s beds for them.  We would bring the kids to visit, and everyone loved them.  As time went on her mind retreated and she started recognizing people as the younger version of people from her childhood.  Visiting was good, she may have thought we were someone else, but it was good for her to interact.

Near the end though Alzheimer’s patient’s become violent. They are frustrated at the fact they can’t remember and they start to just fight back against everything and everyone.  My mother dealt with that.  Patients start losing their ability to do basic things.  The toughest part is that their body in many parts is healthy, it’s only their mind that is suffering.

My dad on the other hand is suffering from vascular dementia.  My father had been suffering from untreated high blood pressure for quite a while without realizing it.  It apparently put little holes in parts of his brain.  Additionally he had a motor cycle accident in his late teens that causes brain damage.  The brain damage from the accident was so bad he wasn’t expected to live, but he had made it – and he One morning my father had a stroke, that was really the beginning of the end.  The doctor found the high blood pressure and started treating it.  My father’s family though has a history of strokes and my dad’s strokes didn’t stop them.  My father has had trouble with clotting and each stroke the doctors wouldn’t realize what was going on until later.  I remember a call where my mother called me and said that my father couldn’t move his hand anymore, had slurred his speech but the doctor over the phone said it couldn’t be a stroke and not to bring him in…. I don’t even have a medical degree and suspected stroke….   Two days later they decided it maybe was a stroke and put him in the hospital.

After a couple years of this, a doctor decided my father needed a heart valve replacement.  My father was having issues with memory, slowly slipping.  My mother was still able to leave him for short periods of time (though he once threw away their smoke detector when cooking in the microwave).  My dad was doing a few odd things like he pushed a grain wagon in the pond by mistake, but he was puttering around the farm…  still going out and interacting sometimes.  I have a video of him sword fighting with fake swords with my youngest.  We debated the surgery though…..  without it according to the doctors, my father wouldn’t have much time left.  Ultimately we left it up to my dad, who originally was saying no, but in the end said yes.

Ultimately the surgery was the final straw.  Unknown to us at the time, surgery like this can cause a drastic decline in some older patients like this…. and my dad was one of those odds.  He went through a personality change that was a little tough to deal with, his memory quickly decreased, and physically he never fully recovered. As he declined quickly he needed a walker, but couldn’t remember to use it.  Not using a walker when you need it, leads to falls.  So we were dealing with health issues, behavior changes, and other new issues and my dad wasn’t a small man.

Moving into memory care, because of the behavior changes, caused my dad to have issues with caregivers in the facilities.  Men are much more rare in nursing homes.  My father was sent to locked wards at first to adjust his meds for behavior, then the first facility took him and just dropped him at an ER and said they wouldn’t take him back.  We were new to all this, dealing with documenting everything, but lost really.  Luckily we found a facility in the Amish community (a couple hours away) that was willing to take my father.  Due to the first facility my father had been blacklisted everywhere close.  After a while my father was able to be moved closer and is now a lot closer… but now he’s no longer in a memory care unit.

Vascular Dementia really can mean that the memory only declines each time there is new brain damage, usually in our case from a stroke.  My father’s body itself has failed him completely.  He can’t walk, doesn’t use one hand, and is pretty much locked away.  My father was always active. My dad was a farmer…  He doesn’t normally speak unless you ask him a question, and then sometimes he just stares at you.  We will continue to visit, but to me it looks like he’s being tortured.  Kind of like the people on television given paralytic drugs and set in front of a tv to watch glimpses of their families lives with no hope of ever escaping.

What I want my Kids to Know

For me I want my kids (and how we decide things) to make decisions that they can live with.   There is enough guilt no matter what you decide when dealing with these things.  Don’t ever let anyone else make you feel guilty over any choice you make. Never second guess a decision you have made, you can’t back and change something you decided in the past – so just move forward and make future plans.  I can say don’t feel guilty over anything you decide or do, but no matter what – if you have anything to do with the decision, you are going to feel some guilt over some parts of what happen.

When Alzheimer’s and Dementia patients reach the point where they no longer remember family and start becoming violent, or the point where they can longer answer questions and just stare, it’s hard to not feel like they are being tortured…. actually some even earlier will tell you that they are being held against their will.  They will call at night and ask to be picked up, taken home.

I don’t include normally much about what my dad and mom are going through now.  If anyone is going through Vascular Dementia and wants to talk privately though they are always welcome to contact me.