As I go through papers I just found the obituary from the paper for Christina Anderson.  It’s amazing the things you can find in an older obituary.  This one reads:

Mrs. Christian Anderson, one of the oldest women of Vermilion county and one of its best died at her home near Oakwood Thursday night after long illness.  For more than half-century she had lived on the place where she passed away.
Mrs. Anderson was born at Dayton OH. Sept. 29, 1831, and came to this county with her parents when a child. The parents located near Oakwood where the deceased spent the rest of her life. On Feb. 2, 1854, she was united in marriage to Louis Anderson, who was one of the early-day school teachers of the county and whose death occurred March 7, 1897.  the deceased is survived by eight children, four sons and four daughters. They are: James F., Louis B., Charles W., Hiram E., Mrs. Julia Cass, Mrs. Belle Thompson, Mrs. Allie Nugent, and Mrs. Nellie Fox.  Four sisters survive, Mrs. Abraham Illk, Mrs. Mary Reece, Mrs. John Manning, and Mrs. Julia Beyer. She leaves also fifteen grandchildren.
Mrs. Anderson has been a member of the Methodist church since a child and was a Christian woman with all that the words can mean.
The funeral services will be held Saturday morning at 10 o’clock from the Lake Shore church, Rev. Wicks officiating.  The interment will take place in the Oakwood cemetary.

In the obituary is listed Mrs. Abraham Illk, who in my records would be Katherine (Voth) Illk.  Abraham and Katherine had a daughter named Frannie who fit into my tree as my great-aunt.  My grandfather (Wesley Richter) was a twin. His twin brother was Lesley Frank Richter (Both born Aug. 1, 1896 in Oakwood Illinois)

Lesley Richter married Frannie Illk the daughter of Katherine Voth and Abraham Illk.  So this makes Christina Anderson part of an expanded tree for our family.   (But the dates don’t seem to add up for what I have down. See below.  Anyone who can clear this up, let me know…)

The really interesting thing to me is that my parent bought the Abraham Illk house when I was in second grade. My brother now owns it and still lives there.  I think the story was that the house was built by Illk with bricks made in the nearby woods.  The house is just a short distance down the road from the house that my father grew up in, and is also on the road of the grade school my father attended.

It was this road (Old State Road) that Abraham Lincoln traveled when attending Circuit court in Danville.  The Willis Hubbard family, living at the eastern edge of the school district, knew Lincoln well. They operated a roadside tavern from their pioneer homestead on the State Road and Lincoln stopped there during his circuit riding days.  Historian H.A. Coffeen wrote in 1870, “.. it was their privilege to have Abraham Lincoln as their guest, in his regular trips to Danville…. Many of Lincoln’s best jokes are well remembered by this elderly couple.” Catherine Voth (Christina’s sister) (1833-1916) was employed by the Hubbards when she was a young girl and recalled seeing the gaunt Lincoln during his circuit riding days.  Catherine Voth married Abraham Illk in 1857.  Her family had also emigrated from Germany but Catherine was born in Philadelphia, Pennsylvania.  The family changed their name from Voth to Ford after reaching the United States.  The Illks’s homesteaded a quarter mile south of the Lake Shore School House.  Abraham Lincoln was well aware of the number of Germans living in the area.  While campaigning in Vermilion County in September 1858, he wrote a letter from Danville to Norman Judd pointing out, “Our friends here wish a German speaker before the election, can you send one?”

Cathrine Voth Ford’s sister Mary, married William Calvin Eldridge On November 9, 1859.  The newlyweds took up residence in the timber just north of the Illk homestead.  On October 14, 1860, they named their first born son William Lincoln Eldridge in honor of the circuit riding attorney so well known in the community.  In less than a month the attorney would be elected president.

Reading this I also notice William Lincoln Eldridge name as one of my ancestor’s also (great grandfather.   My grandmother was Mildred Eldridge (daughter of William Lincoln Eldridge).  So it looks like Christina Anderson was actually closer related than I thought.  This would make her sister Mary my great-great grandmother.  I’m still not sure about he dates… So I think that makes her my great-great aunt. I’ll have to check into it more… 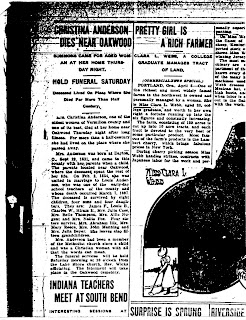