Wills are another great source of information.  In this will of John McArdle living in Georgetown IL he lists his children that include Remus, Collins, and Uriah as sons and Cynthia McArdle and Electry Wygle as daughters.  (Also from this we have Electry’s married name. )

It also shows he owned 162 1/2 acres at the time.  It also lists a daughter Albertine, and sons John McArdle and Martin McArdle.  He also listed daughters Mary and Naomi and listed a deceased son, Charles (that had children).  The will lists who will receive what portion of his estate and lists Uriah as the executor.  So from this we know that John McArdle at Age 67 had sons – Remus, Collins, Uriah, John, and Martin that were still living, Charles that had passed away, and daughters, Cynthia, Electry, Mary and Naomi that were still living.  We also know that he had grandchildren from Charles at this time.  He may have had other grandchildren, but Charles is the only one expressly named.   Later I’ll write up the family store about Uriah and how he passed away saving the life of one of his siblings daughters.  (Run over by a team of Oxen I think)  Uriah was my direct ancestor. 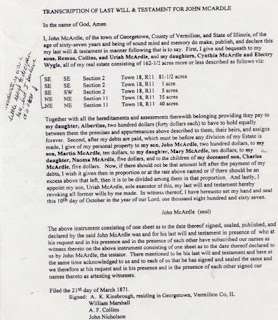