One of the photos in my collection is the Leroy Trackwell Family.  The photo has 8 people in it and I was able to find a census record for a Leroy Trackwell from 1900 in Leavenworth Kansas.

I remember from stories I’ve heard that some family was located in Leavenworth, Kansas – so I’m fairly certain this is the right Leroy Trackwell.  The 1900 Census shows that he was 55 and was born in March 1845 in Indiana. He had married in 1874.  There was also a 1930 census record from Rainbow Washington.  He was listed as 85 and listed as Father in Law of the Head of Household.  Members of the Household were:

This would make Leroy the right age, but not sure if the household is correct since the Daughter would be 7 at the 1900 census but wasn’t listed in the previous census. It’s definitely worth making a note of to research more if following this line of the family. 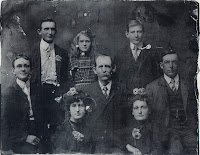