Growing up my dad always had a pocket knife with him.  He used it for everything from cutting up fish to slicing apples right from the trees to take a bite.  I have absolutely no clue how many things that pocket knife went through, but my dad would use it for everything – including things to feed us.  Cutting watermelon up, apples, anything that seemed to need sliced, peeled or scraped.

I also remember the times I got splinters and my dad would offer to get them out for me.  I had seen my father dig them out himself with his knife, but my aunt had taught me the trick of using a straight pin and pushing a splinter out from the opposite direction.  So much easier than letting my dad near my hand with a big pocket knife that had probably been through more animals, wood, and anything else that needs sliced.

Surviving childhood always amazes me when I think of the things we did as kids.  Germs, dirt, raw food it was all just a part of our life growing up in the country.  I remember seeing a picture someone shared of some farm kids out all licking the salt lick from the cows in the field.  Growing up it wasn’t something we would have even debated as strange or dangerous to try it.  Carrying eggs that had come straight out of chicken and then immediately having them for breakfast, wasn’t something to find strange….  I even took a few hard boiled to school, including goose eggs.  Leaving eggs on the counter for a few days until we use them wasn’t abnormal. – Eggs unwashed will actually last quite a while.

I can still picture that pocket knife though I have no idea where it has ended up – brown with it’s gold trim at each end. My father’s hand around it as he closed it (it was one that you had to squeeze it to close).  I know the thought crossed my mind every time I tried one that I was for sure going to cut my fingers off trying to close it, but for my dad it didn’t even seem to cross his mind.  That pocket knife was a staple in his pocket as well as his wallet in the other pocket – that I’d swear would have moths flying if he had ever bothered to pull it out and open it.  I think I ever even heard of my dad opening his wallet twice in all the time I remember… once was to get a rabbit for my oldest…  That pocket knife though…. it was out every day!

As kids my Aunt once decided to teach us to play golf (my brother and I).  She showed us how to hold a club and some of the basics…  My dad, who normally didn’t do a lot with us – he was always busy with the farm, decided to build us our own golf course.  My dad went around our yard and dug little holes putting cups in them.  Our yard was fairly large, so by the end we had a pretty big ‘golf course’.  At other times we had used parts of it as baseball diamonds also!

So when trying to figure out what to do with my son for his birthday I decided since he likes golf – Let’s make a (mini) golf course!  So we got some parts, and put out a course all over.  We used lawn ornaments like gnomes from around the yard and made our own course for his party.

My dad also spent time during off seasons making things like race tracks for us – using a tractor, digging ponds for everything from fishing to ice skating, and making paths for snow mobiles.  There was never a dull moment.  I can’t give my kids all the same things, but hopefully we can do a little of the same type of fun.  The mini golf course was unique for sure! 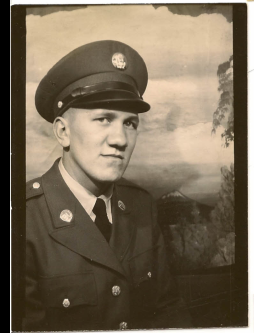 My Dad and Camping

My dad was in the reserves shortly before I was born.   This is a small picture of him I have in my files.  I think it’s the only one I have of him in uniform. I remember my dad never wanting to camp out and he would tell stories about finding snakes in your boots when he was in the reserves.  His other comment was always “We live in the woods, why would we want to go sleep in it”.

I’m still not big on camping, as I’ve gotten older I’ve realized that as a child we had plenty of chances to practice camping out.  Storms where we had no power for a week. No power meant no water, no water meant no toilets.  Living in a subdivision there is nothing like living in the country.  Even when the power goes out we can flush the toilets and run water.  Imagine having to melt snow to get water to flush the toilet.  Even the camping sites I’ve seen now have access to regular bathrooms.

Now my parents have a generator, but I remember my dad doing his best to work around by hooking a tractor up in some way to run a few little things.  We always had a huge gas and a huge diesel tank in our yard for extra fuel.

After a few years we swapped to heating the house with wood, wood was always something that there was plenty of around the yard.  We had our own log splitter run by a tractor and would have to work to split wood most of the summer to have it for winter.  The wood burning furnace was hooked into the duct work with a blower (blower didn’t work with the power out).  We also had a fireplace and a wood burning stove though.  For long power outages we could move down and sleep in the living room to be near the heat.