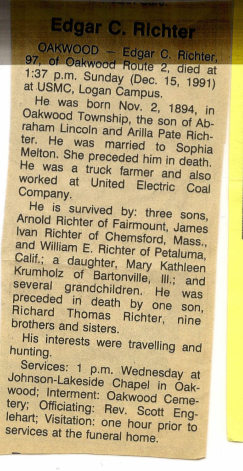 He was born November 2, 1894, in Oakwood Township, the son of Abraham Lincoln and Arilla Pate Richter. He was married to Sophia Melton. She preceded him in death. He was a truck farmer and also worked at United Electric Coal Company.

He is survived by: three sons, Arnold Richter of Fairmount, James Ivan Richter of Chemsford, Mass., and William E. Richter of Petaluma Calif, a daughter, Mary Kathleen Krumholz of Bartonville, Illinois: and several grandchildren. He was preceded in death by one son, Richter Thomas Richter, nine brothers and sisters.

His interests were traveling and hunting.