I found part one of Lindsey Corbly’s obituary. I still find it really interesting that they not only list his parents and their information but also his grandfather and some of his history.  The article is over two pages and includes information about his grandfather’s children that were massacred by the indians.    I think the long obit was because he was a well known pillar of the community.  He was one of the first settlers of this area in Illinois and outlived two wives.  (Married three times)  Lindsey Corbly’s grandfather Rev. John Corbly was a settler before 1776 and was one of the first members of the state congress.  A museum is dedicated to his history near his family farm “Slave Gallant”.

John Corbley Farm, also known as Slave Gallant, is a historic home located at Greene Township in Greene County, Pennsylvania. The house was built about 1796, as a two-story,five four bay, brick dwelling on a stone foundation. It has a gable roof. It’s builder, Rev. John Corbly (1733-1803), was a founder of the local Baptist church and rebel associated with the Whiskey Rebellion. In 1782, his family was massacred in the Corbly Family Massacre.[2] The farm name of ‘Slave Gallant’ derived from Slieve Gallion in Ireland, which was nearby where John Corbley was born and raised before emigrating to Pennsylvania.[3]

It was listed on the National Register of Historic Places in 1984.

Additionally Rev. John Corbly’s family with his second wife was massacred by he indians near Fort Garrard. A monument still stands in remembrance of the event.  I am descended from his third wife.

Lindsey Corbly passed Away this Morning

Lindsey Corbly, pioneer citizen of this community, passed away Friday morning at 12:15 at his home on W. State Street after an illness of but ten weeks.  Had he lived until Nov 15 of this year, he would have been ninety-one years of age, Mr. Corbly’s death was due to the infirmities of old age and his final illness was without suffering. During this time the members of his family have been constantly at his bedside.

To the relatives who are left to mourn his sad loss the Record and friends extend the hand of sympathy.

Lindsey Corbly, an early settler of the territory now comprised in Ford County, is a native of Pennsylvania.  He was born in Green County, that state on the 15th of November, 1831, and was the son of William and Rebecca (Stevens) Corbly, both of whom were natives of Greene county. His father was a son of the Rev. John Corbly, a minister of the Baptist church and a native of England, who emigrated to America some time prior to the war of the Revolution and settled in Greene county, Pa., which was then a wilderness.
He has three children massacred by the Indians, and his history has been commemorated by several centennial sketches of historic interest pertaining to the early settlement of that part of the Keystone State. He was an active and influential minister, and was the founder of several churches. Great energy and decision were his prominent traits of character. His death occurred in 1803.

William Corbly, the father of our subject, was born, reared and married in Greene county, and the same was true of his wife. They had a family of eight children, of whom Lindsey was the fourth.  In 1837 the family emigrated to AThens county, O., now Vinton, and settled in McArthur, where the subject attended the public schools until sixteen years of age, at which time he left home and entered the service of ….  The Sevens, who was iness in Fairfield county, Ohio, and with whom he made several trips across the mountains with stock to Philadelphia and New York.  In 1853 he came to Illinois and first settled in Champaign county.

On the 24th of February, 1856 in Vermilion County, this state, Mr. Corbly was united in marriage with Miss Sarah Wood, a daughter of Henry Wood.   This union was graced with three children: Henry L who married Julia B. Webber, is a farmer of Harwood Township, Champaign county; William Sherman who wedded Mary Youle, and who was for many years an agricultuist of Button township Ford and James ….. 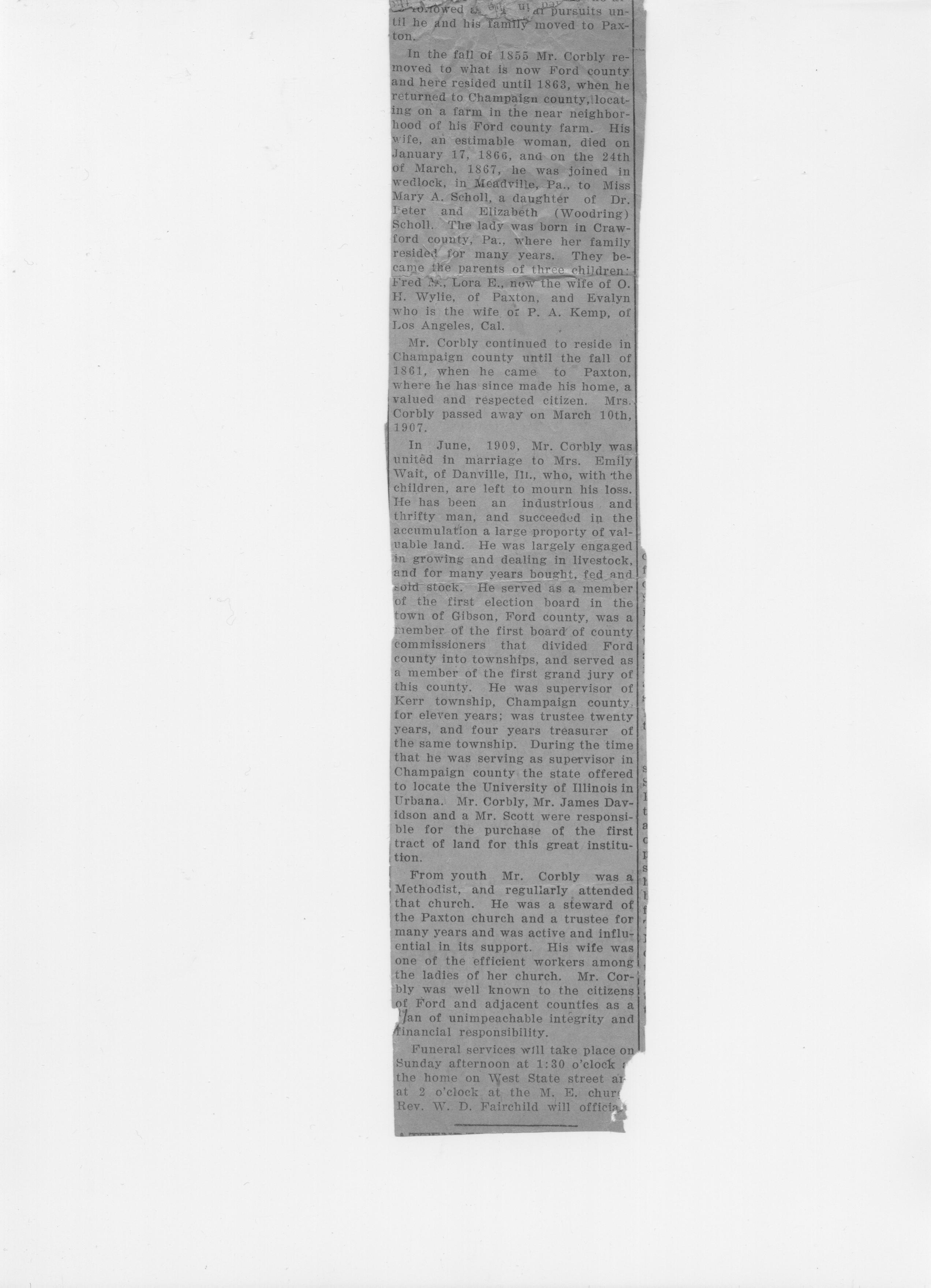